AR/VR and what it could mean for electronic design

Augmented Reality and Virtual Reality are exciting new markets being driven by innovation, emerging in Gaming, Manufacturing, Engineering, Design and Retail sectors. In 2018 it was reported that the Virtual and Augmented Reality market was set to soar to $170 billion USD by 2022. To put this into context, in 2016 these markets were worth $2bn and $4bn USD respectively. So these technologies are rapidly evolving and enabling users to experience things they haven’t before.

What’s the difference between AR and VR?

Both can change the way we interact with the world around us, but the technology behind it is different.

Augmented Reality (AR) gives a digitally enhanced version of reality, typically through smart phone devices. A unique example is Google’s venture into AR with Google Glass, glasses that alter the lens by overlaying what a user sees through their own eyes with added images, info, speech and sounds.

Virtual Reality (VR) is a completely immersive experience whereby you’re closed off from reality and interact with a three-dimensional computer-generated environment. VR headsets, omnidirectional treadmills and special gloves are used to stimulate our senses to create the illusion of reality. This technology has been commonly seen through the gaming and entertainment industry and is now being introduced rapidly for more serious applications.

What industries are using this technology? 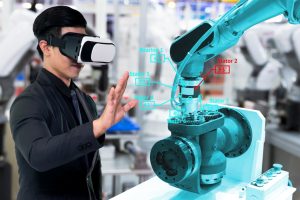 Whilst VR/AR is often associated to the gaming industry, it has been steadily emerging across many more sectors from education and marketing right through to retail and architecture. The early adoption of this technology (beyond entertainment) has allowed for immersive experiences for employees, clients and customers. For example, VR has been used to deliver immersive training experiences for students and recruits, providing virtual environments with real-life simulated situations.

Similarly in medical environments, realistic virtual models of the human body can offer healthcare professionals valuable insight ahead of performing new or high-risk procedures. In retail, VR allows customers to test products, view 360-degree angles of a potential purchase and interact with it before they buy it, whether the product is actually present in store or not.

One area well positioned to benefit from technologies such as VR/AR is manufacturing and engineering, with the potential to increase efficiency and accuracy in fabrication and assembly processes. In engineering fields like PCB design where the work is precise and intricate, augmented reality can give engineers visual representations at every stage of the process to increase efficiency. This could work to build a virtual instruction manual, and even enable an engineer to move between layers of a printed circuit board.

AR simulations could speed up production chains and offer better quality assurance by providing engineers with an environment in which to test for problems in the early stages of production or design. Such simulations present the challenge of designing smart glasses that can be worn by an engineer or operative, but the potential is there.

Virtual reality could also provide designers and customers with a better insight into how a product should look or perform by creating realistic PCB components, before manufacturing has even started. Visuals of components to check how they’re wired or to identify missing parts are just some of the ways in which this technology could be advantageous in electronic design. 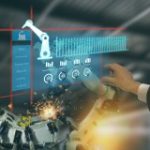 With market predictions being in the hundreds of billions within three years, we’re set to see the technology applied through and into multiple mediums. While AR/VR may have a place in electronic design in the future, the development into mobile devices and wearable technology looks to be the next big step to mass market for both technologies.

Of course, these predictions may just be hype. For instance, 3”D” televisions have failed to gain any significant consumer market and are being dropped by manufacturers. Some immersive visual environments are reported to induce nausea after lengthy sessions and so this could limit its industry use. Furthermore, the cost of developing these virtual environments is colossal and so their penetration into the general experience of the public may be doubtful.  Just as the smart money is not on self-driving cars anytime soon, with the exception perhaps in captive and controlled environments more akin to railways. So we await the immersive audio-visual to inform us.

Any thoughts? We'd love to hear what you think or how you are currently using this emerging technology in your industry. Follow us on Facebook or Twitter and get in touch!